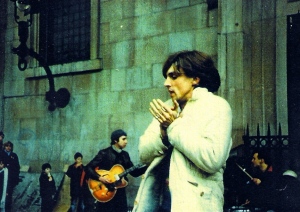 I promised a Royal Wedding story: in the late 1970s my musical life was pretty quiet until I got a call from some London-based pals. We’d played together in Skys is Cryin’, an acoustic country-blues band, in the mid 1970s but they’d mostly gone to London and formed a band called the Operation which played various gigs but also busked regularly at the then newly re-vamped Covent Garden

Their singer went abroad so they called me up and every Friday night I’d leave Pompey and spend the weekend in London. We’d earn plenty at Covent Garden and there I am (above) singing; on the left is Denis Reeve-Baker on guitar (also with Pompey bands, the Mooks, the Reds and Reet Petite & Gone) and on the right is drummer Paul Hookham – a Pompey teaching student previously, who also played with the Redskins. Pompey boy Keith Matthews played saxophone and Andy Rankin later of the Pogues was also a member

The Operation often had 10/11/12 members. One weekend a guy arrived at Covent Garden and signed a bunch of the regular, varied acts to play at the opening of the London Film Festival. So off we went to the South Bank National Film Theatre (good dosh) where we performed and were presented to Prince Charles and Princess Diana. I think they were married by then, I can’t remember – but it’s absolutely true. We played lots of R&B, rock & roll, rockabilly, blues etc – mostly dance stuff – although I can’t recall if they danced.

It was a delightful band but impossible to maintain and organise. We finished busking around Christmas 1981 and I came back to Pompey to play regularly with Steel Mill – especially Friday nights at Charlie Hurdle’s (Eastney). I didn’t get an invite for tomorrow so I’m off to the cricket.

Here’s one from Phil Freeman (thanks Phil)

Were you in a band? I’d rather like to collect some ‘set lists’ or at least lists of songs played. After Harlem Speakeasy split (see previous post) I was in Rosemary (greatly loved, always missed etc). For much of our later relatively short life we played our own stuff but initially we played a real mix of old blues and newer rock/psychedelic/ singer-songwriter stuff – some of them I can’t even remember but that’s what they say about the 60s. This is the list I have:

It’s a good week for royalty I guess, so here’s an intriguing bit of info I discovered only yesterday about local links with Queen. Like me, you may well have known for some time that local boy Spike Edney plays keyboards with Queen but I’ve learned that Richard (Ritchie) Anderson worked for some years as personal ‘roadie’ to Brian May (imagine being so famous that you have a personal roadie!)

For a brief period around ’68 Ritchie was a pal of mine as he was roadie and generally the ‘in charge’ organiser of Harlem Speakeasy, not least when we went pro’ which was a very tough time logistically, managerially etc. He was a great guy

Spinner predicted “Coconut Mushroom will turn professional” as they signed for Apple. An interview with Derek Shulman confirmed that they “love the (Indigo) Vat crowd” but in early April, Spinner reported the club’s unexpected closure. Harlem Speakeasy and their lights could be seen for 3/6d* at St Margaret’s Church Youth Club in Highland Road. (*17.5p)

HOW TO SURVIVE A HEART ATTACK WHEN ALONE

Since many people are alone when they suffer a heart attack, without help, the person whose heart is beating improperly and who begins to feel faint, has only about 10 seconds left before losing consciousness.

However, these victims can help themselves by coughing repeatedly and very vigorously. A deep breath should be taken before each cough, and the cough must be deep and prolonged, as when producing sputum from deep inside the chest.

A breath and a cough must be repeated about every two seconds without let-up until help arrives, or until the heart is felt to be beating normally again.

Deep breaths get oxygen into the lungs and coughing movements squeeze the heart and keep the blood circulating. The squeezing pressure on the heart also helps it regain normal rhythm. In this way, heart attack victims can get to a hospital. Tell as many other people as possible about this. It could save their lives!!

A cardiologist says If everyone who gets this mail sends it to 10 people, you can bet that we’ll save at least one life.

Rather than sending jokes please, contribute by forwarding this mail which can save a person’s life…If this message comes around you … more than once … please don’t get irritated … YOU need to be happy that you are being reminded of how to tackle … Heart attacks … AGAIN!

The Easter weather was terrific and the Birdcage fans will have enjoyed the return of the Vagabonds on the Saturday while other Birdcage visitors around then included Georgie Fame, Cliff Bennett, the Paramounts and the Cat. American soul singer Arthur Alexander (“You Better Move On”, “Go Home Girl”) appeared on the Sunday after Easter and the club ran its first two all-nighters with the Vagabonds and Graham Bond plus the Clique.

Simon Dupree & Big Sound were promoting their new single “Reservations” with local record store appearances. They attracted a big crowd to a Portsmouth Youth Organisation dance at Clarence Pier and BBC screened their documentary on 17 March – they played also at “Heatrave” at the Savoy with the Inspiration. The folk scene was busy: Malcolm Price returned to the Folkhouse Club and American Hedy West came to the Ballads & Blues Club – she was perhaps one of the most underrated of the young American singers of the time, recording three albums for Topic Records in Britain in the period. In mid-March Jon Isherwood played the Pomme D’Or, Talbot Hotel and Folkhouse over four nights. Wizz Jones & Pete Stanley brought bluegrass to the Folkhouse and Jo Ann Kelly her Memphis Minnie-style blues to the Railway Hotel. Jazz became more regular at North End’s Oasis again with Tia Juana Jazz Band and then Ken Colyer. Easter was lively at the Birdcage where Chris Farlowe and the Academy played the latest all-nighter. Academy, “very popular” at Manor Court, were generally attracting good reviews including an appearance at the opening night of “Unliteabsorbing” – a new club or “Audio Visual Environment” underneath the Birdcage – a sign of the looming ‘summer of love’ and shift to psychedelia following Pink Floyd’s appearance at the Birdcage earlier in 1967. John Vivash opened two clubs locally with the Informers at Milton’s Oyster House and the Vogue in Havant.

This is the programme for the first league match I saw at Fratton Park in November 1959. In some ways this particular story has a sad element. I had been taken in the spring by a mate’s dad who got the weeks wrong and we saw the reserves. So I missed by one week seeing Pompey in the (old) First Division. Also this match was the first missed by Peter Harris the last great local-born Pompey player who then retired with a serious illness. So I missed him too.

Still at least I saw Jimmy Dickinson – and DICK BEATTIE (see Dave Glass’s comment below). Dick came from Celtic and played in 1961/2 when Pompey won Div 3 (pic below) but had a poor game on Easter Saturday, was dropped, never played again and was transferred to Peterborough. SO by the time that pic was published in Topical Times Annual he’d left and I never did get it signed – I still have it but Dick died 20 (ish) years ago.

In between times (to complete DG’s comment) he was prosecuted and jailed for match-fixing after which he returned to the Scottish shipyards (look it up on Wikipedia). And if you’re not interested in the footy at least the adverts are great huh?

During March, the Beatles found themselves simultaneously at numbers one, two and three in the American charts. In Britain, the Government were concerned about the ‘pirate’ radio stations and explored the possibility of the south coast as the site for an experiment in local broadcasting. It came to nothing. The Easter Rendezvous ‘special’ with the Animals supported by the Midnite Ramblers attracted 600 fans. Ricky’s opened the Portsmouth Modern Jazz Club with the Dougie Wheeler Quintet. Frank Kelly & the Hunters new release was “Some Other Time” – Frank was at South Parade Pier, the Classics at Lee Tower Ballroom and the Vigilantes with Cliff Bennett & the Rebel Rousers at the Savoy.

In Bognor police kept moving on hundreds of youths as the Mods & Rockers holiday ‘fun’ reached its climactic year. For those in search of innocence, Mary Poppins opened at the Odeons. The Arthur Ward Band and the Coastliners were at Clarence Pier, Manfred Mann and Dave Berry at the Guildhall while on Easter Monday Pompey’s greatest player Jimmy Dickinson appeared on the Fratton Park pitch for the last time (see team pic below, centre seated). In the evening, Downliners Sect and Stormsville Shakers were at the Rendezvous. At the Birdcage (Thursdays only and at Kimbells) the T-Bones appeared on Maundy Thursday and the Paramounts (later to be Procul Harum) the following week.