In 1966, I bought the first album by the Paul Butterfield Blues Band

This is track one, side one HOWEVER the person who posted this, added the wrong album cover. East West shown here was their second album. The first one was a real scorcher, a great album – interesting that they had a rhythm section of two black guys steeped in the Chicago blues scene. Butterfield was a very fine ‘harp’ player, although not a great singer. But at 16, I simply loved this album and longed to play in a band like this!

I’d earned the money having started my selling of the Evening News through the summer – I had enough left from a decent Bank Holiday Monday to go to the movies where I saw David Warner and Vanessa Redgrave in Karel Reisz’s Morgan a Suitable Case for Treatment. Irene Handl was hilarious as Morgan’s mum, but I’ve never seen it since.

50 years ago the Birdcage was only open on Saturday for an all-nighter with the Action. Then it closed completely for five weeks, re-opening in July with …

I spent Friday evening (27th) with some mates in Gosport watching a group called The In-Pulse. I probably wore some new trousers purchased that day from Squires but no details of what or how much. I was doing my ‘O’ levels so not going into school and I’d just started a job selling the Evening News on Southsea Seafront (by the Rock Gardens).

So who were the In-Pulse? There’s nothing about them in those books by Mick Cooper and Dave Allen (hopeless!)

It was of course the Whit Bank Holiday as now, although the August BH was in those days the first weekend of that month and neither New Year’s Day nor May Day were then ‘days off’ (came in the 1970s).

It seems I’m alone in any views on recent ‘BOB’. Anyway I’ll stop grumbling and wish him a Happy 75th Birthday today. On Friday I’ve a gig with Scarlet Town at the Winchester Arms somewhere in the depths of Copnor where I shall sing one or two of his old songs. It’s a weekend beer festival and we’re on at 9pm after a punk band. It’ll be interesting to see what they make of acoustic guitar, flute/clarinet, violin and dobro …

Welcome back to JR from his fun & games in Manchester – and incidentally, his mate CP Lee has written a very fine account of his Bobness and the “Judas” shout. I take this view because I have the book among about a dozen others on the same subject of the great singer/songwriter. I’ve just checked and in addition, I have 34 Dylan albums on CD (some doubles/trebles) about a dozen vinyl albums and other bits & pieces on ITunes.

In other words I pretty much like the guy. I’m not in Spider Man’s league as a ‘fan’ but against your average punter I’m pretty convinced – and across 50 years from the first album to Tempest in 2012 at least.

But then he made one of the worst Christmas albums in history (give me Pinky & Perky any day) followed by his Sinatra abomination Shadows in the Night and now he’s done it again with a new album called Fallen Angels.  It includes classic songs like Skylark, That Old Black Magic, Young at Heart, Polka Dots & Moonbeams,  and On a Little Street in Singapore.

I love those songs – and Sinatra – but this stuff is just shit. It’s not big and it’s not clever, despite a fine band playing with him. If Bob has finally reached the point where he has nothing new to offer I don’t mind at all if he sits around with his mates and groans his way through this stuff but I wish he would stop recording it and putting it out. There’s always a sense of anticipation and expectation with a new album by someone you love and for a few years now – for me at least – it’s been followed by a huge sense of disappointment. Still at least I didn’t buy it.

For my own good

Mind you, where’s Spider Man when you need him?

Working backwards, I’m still waiting for JR to remind us about Guy Clark in Pompey but I’m sure he did come – maybe more than once.

Then there was Tuesday

Firstly I’d like to stress that my lived experience around Pompey in the 1960s was much like ‘Oscar’s’. It was a nightmare wearing Posh Pompey Grammar uniform although the only time I was near Buckland was going through on my bike at a rate of knots, on the way to playing rugger/cricket and enjoying matron’s teas at Hilsea .

So there’s that lovely old DJ taking the piss once more on the morning when I’m trying to think of an imaginative response to an event which has assumed legendary status over exactly 50 years, where a bloke in the crowd shouts out a term of abuse and a famous musician replies “I don’t believe you … (etc)”. It was the 50th anniversary on Tuesday and I thought I was being so clever turning it into a Pompey story but as I said at the top – “too clever for my own good”

Spider Man would have got it but he’s probably on a week-long pilgrimage to Manchester to mark the original event.

Phillip Haines has emailed to report the death today of the American songwriter and singer. He asked whether Guy ever played in Pompey – I thought more than once at the South Parade Pier, promoted by John Roberts

I was strolling through Buckland in my Birdcage finery and minding my own business when this huge hulking brute shouted across the road “Oi, you poofter, f**k off back to Sarfseee”

I thought the incident might go down in history, but it seems to have been forgotten.

Does what it says on the drum 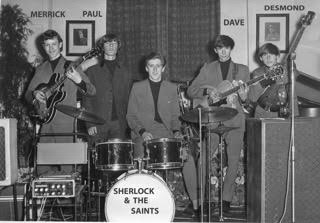 Sent by Pam Wilkins who went to Plymouth (did I mention 89-and-a-half won’t do?)

These guys have always been a bit of a mystery to me although you can just make out the individual names at the top – who knows anything?

Incidentally, I did enjoy all the lively discussions on the previous post. Just when I thought (again) we were fading away